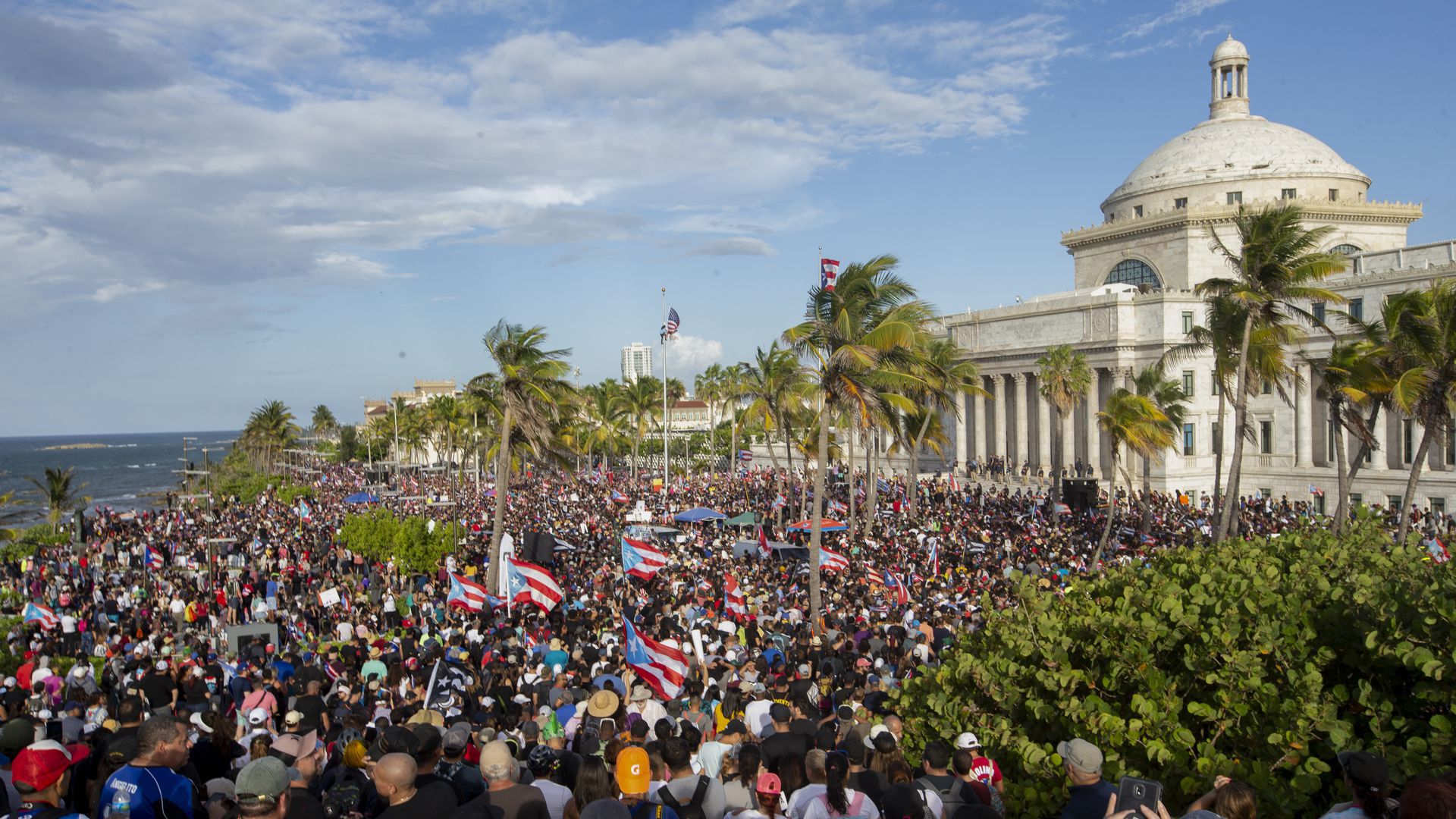 Finally, at the end of every press release, write a Call To Action asking the reader to take a specific action on the website, be it become a member, subscribe to the newsletter, or donate. Make Sure To Link.

Note: Save this for future admins and volunteers. Apply this template to all press releases below. Avoid uploading documents as images, instead copy and paste content from docs directly into editor(for SEO, pagespeed, and consistent display).

This is a great deal for PREPA bondholders but a terrible one for Puerto Rico’s energy consumers and generators. It runs counter to Puerto Rico’s Energy Public Policy Act of 2019, which provides a path forward to a more decentralized electricity system, increasingly reliant on renewable sources and on consumer power generation.

The current electricity rate in Puerto Rico is approximately 22 cents per kilowatt hour (c/kWh) compared to the national average of 10.38 c/kWh. The Agreement establishes that Puerto Ricans must pay for the 47 year lifetime of the debt a surcharge equivalent to a rate increase of nearly 20%. Combined with other charges resulting from the restructuring of the utility, the debt surcharge would increase the base electricity rate by nearly 28%.

Customers that generate their own electricity will be subject to a debt surcharge unless they are completely and permanently disconnected from the electric grid. This debt surcharge stifles the population’s growing desire to become energy independent and resilient after a major disaster strikes.

Fiscal policy experts recommend reducing Puerto Rico’s overall debt by approximately 80 percent, yet the Agreement generates a reduction in the principal of the existing PREPA bonds of only 22.5 percent.  Puerto Rico's government does not have the resources to pay the debt, maintain basic government services and jumpstart a moribund economy.  Nor does Puerto Rico have the resources to make a series of capital investments in PREPA that will reduce its dependency on oil and its operating costs.

PREPA’s electrical grid is obsolete and has been in a state of disrepair for decades.  Yet rating agencies continued to give PREPA investment-grade credit ratings, and underwriters and legal advisors continued to collect fees on various loans and debt deals.  Why must Puerto Rican consumers bear the heavy economic burden of PREPA’S mismanagement and Wall Street’s greed?

The Puerto Rican legislature has the power to stop this horrible deal, which will impede Puerto Rico’s recovery and condemn its people to sustained economic hardship.  We ask that Puerto Rico’s Senate and House of Representative show their political muscle and do right by the Puerto Rican people. 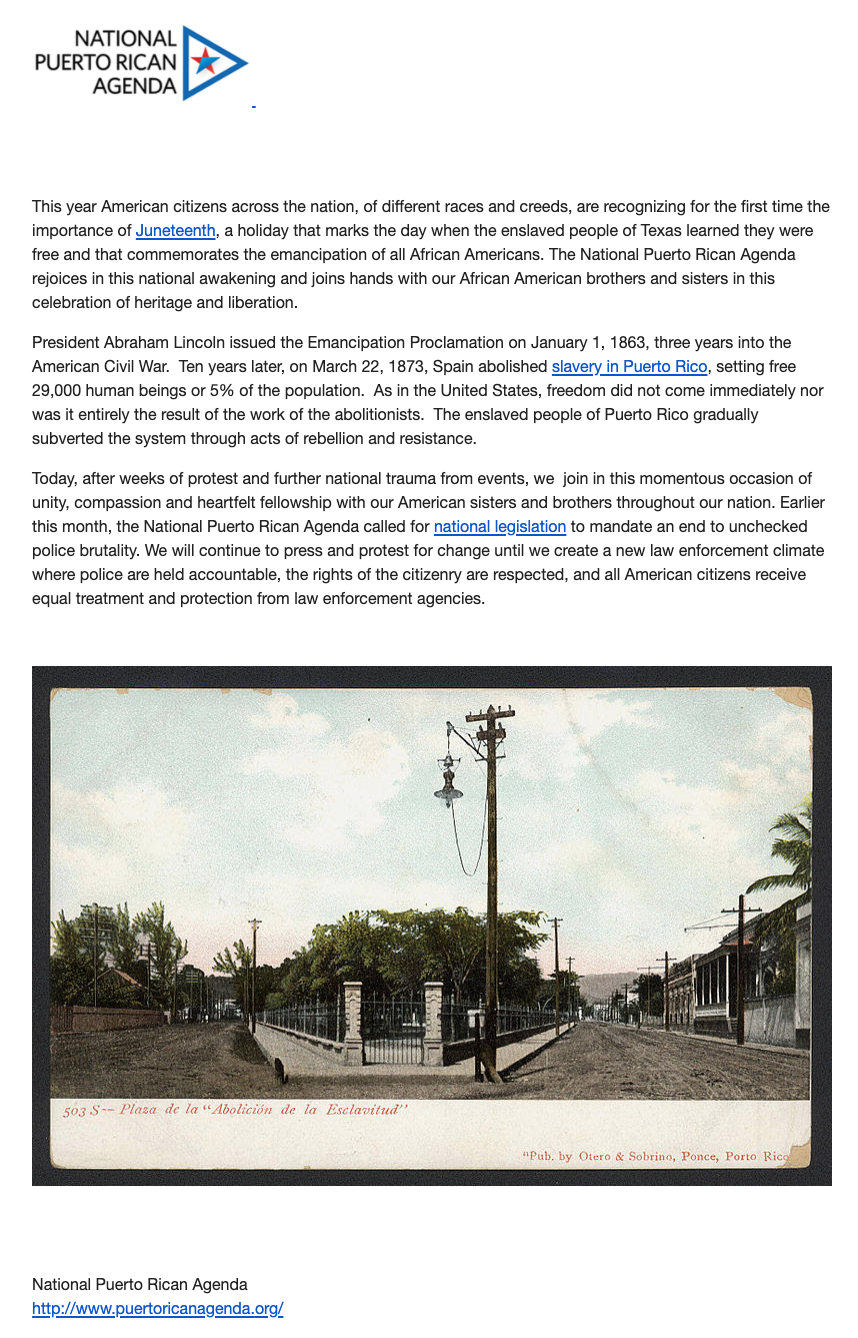 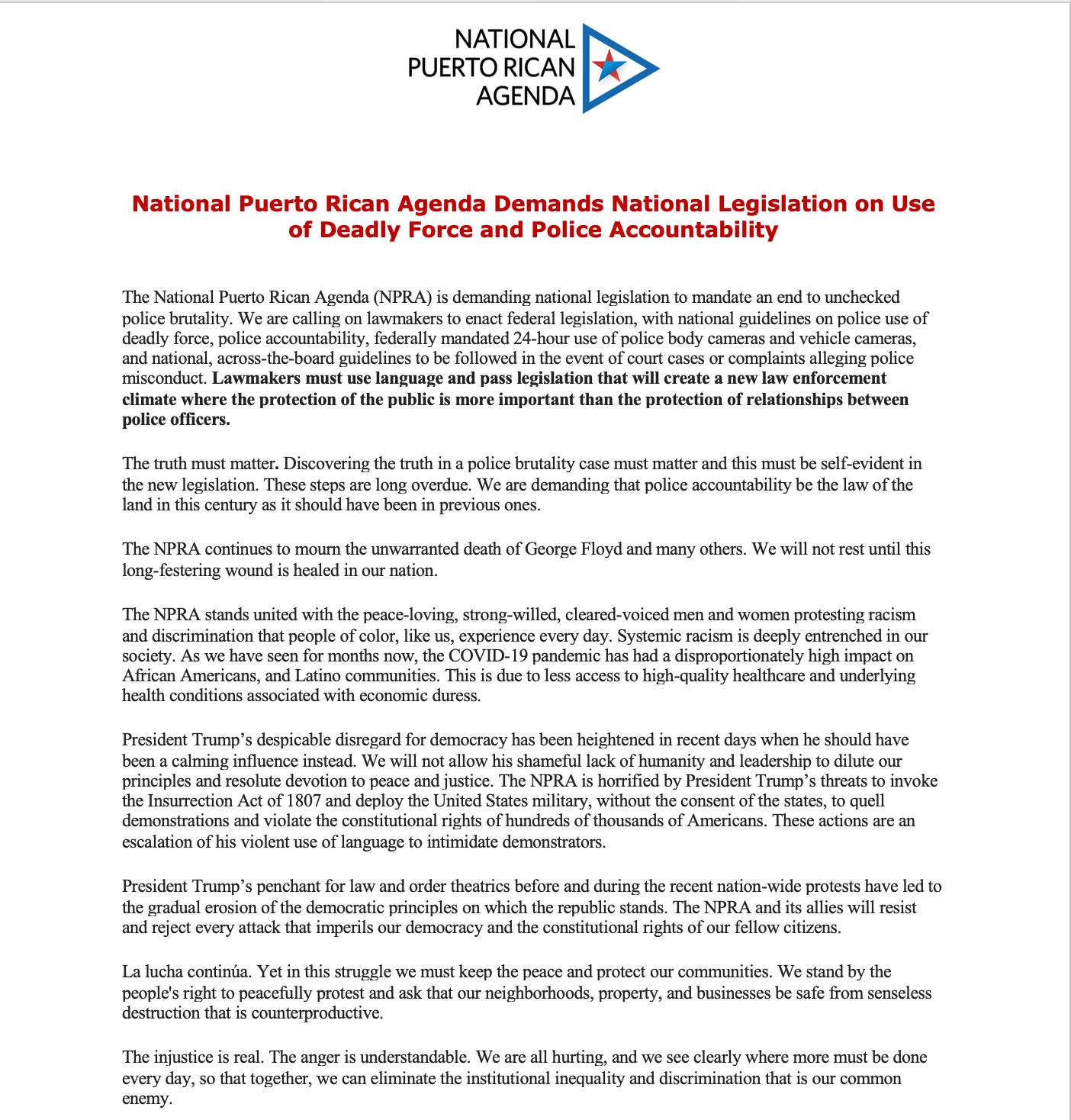 The National Puerto Rican Agenda Stands in Solidarity with the People of Puerto Rico During This Time of Renewed Crisis.

The people of Puerto Rico are foremost in our hearts and minds as they contend with the ongoing impact of back-to-back earthquakes registering 6.4 and 5.8 magnitude on Tuesday, January 7, 2020. The earthquakes and aftershocks, including at 6 magnitude earthquake on January 11, have struck Puerto Rico’s vulnerable communities while they are still contending with the aftermath of Hurricanes Irma and Maria. The loss and destruction caused by the earthquakes has destroyed homes, schools, businesses and public facilities.  We want our fellow Puerto Ricans to know that we are here for them and will remain vigilant in their time of need.

In response to the earthquakes, President Trump approved federal emergency funding for Puerto Rico last week authorizing the Federal Emergency Management Agency (FEMA) to provide equipment and resources to the victims of the earthquakes. The President’s authorization will allow FEMA to provide direct federal assistance up to 75 percent of costs, and the island's Financial Oversight and Management Board authorized up to $260 million for an emergency fund to cover the local share and other expenses.

Yet, the Trump administration is withholding available disaster aid to Puerto Rico already approved by Congress, including $9.7 billion in aid to Puerto Rico from Department of Housing and Urban Development (HUD). Given this week’s earthquakes, the NPRA believe that the Trump administration is in violation of the law by withholding the congressionally approved money and demand the release of all disaster funding as they were approved by Congress.

As state-side Puerto Ricans, we have a responsibility to help island residents recover by assisting relief organizations on the ground as well as facilitating action that promotes an appropriate policy response to this crisis by our Federal Government.

Below is a partial list of relief organizations that are currently on the ground providing aid to all citizens impacted. We encourage you to support these efforts in any way you can.

Puerto Rican organizations with "boots on the ground”:

United States based solidarity groups with a direct-support approach to organizations with “boots on the ground”:

5. The Puerto Rican Agenda of Chicago:https://www.puertoricanchicago.org/

Thank you for your support and continued commitment to Puerto Rico.
National Puerto Rican Agenda
http://www.puertoricanagenda.org/ 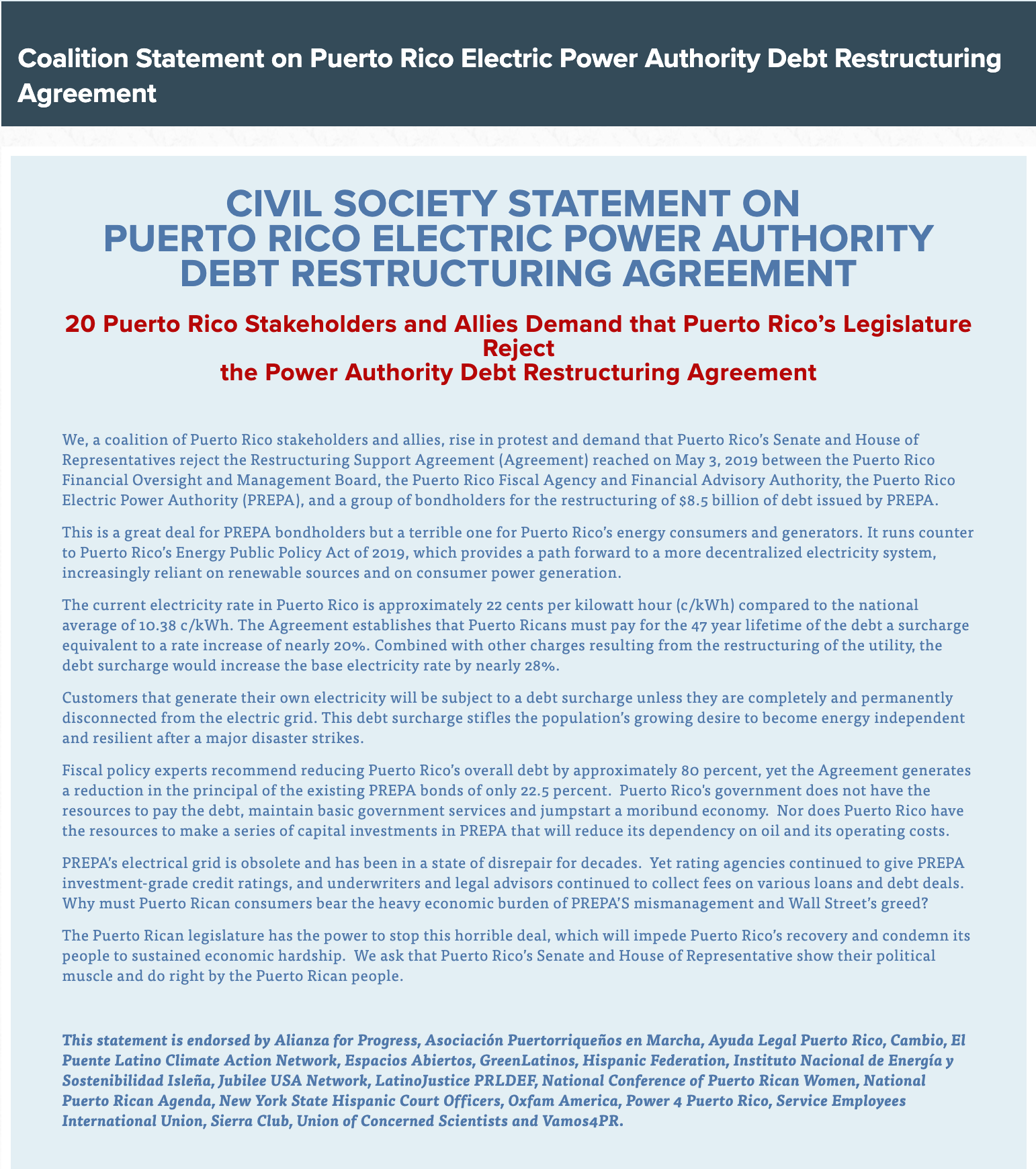 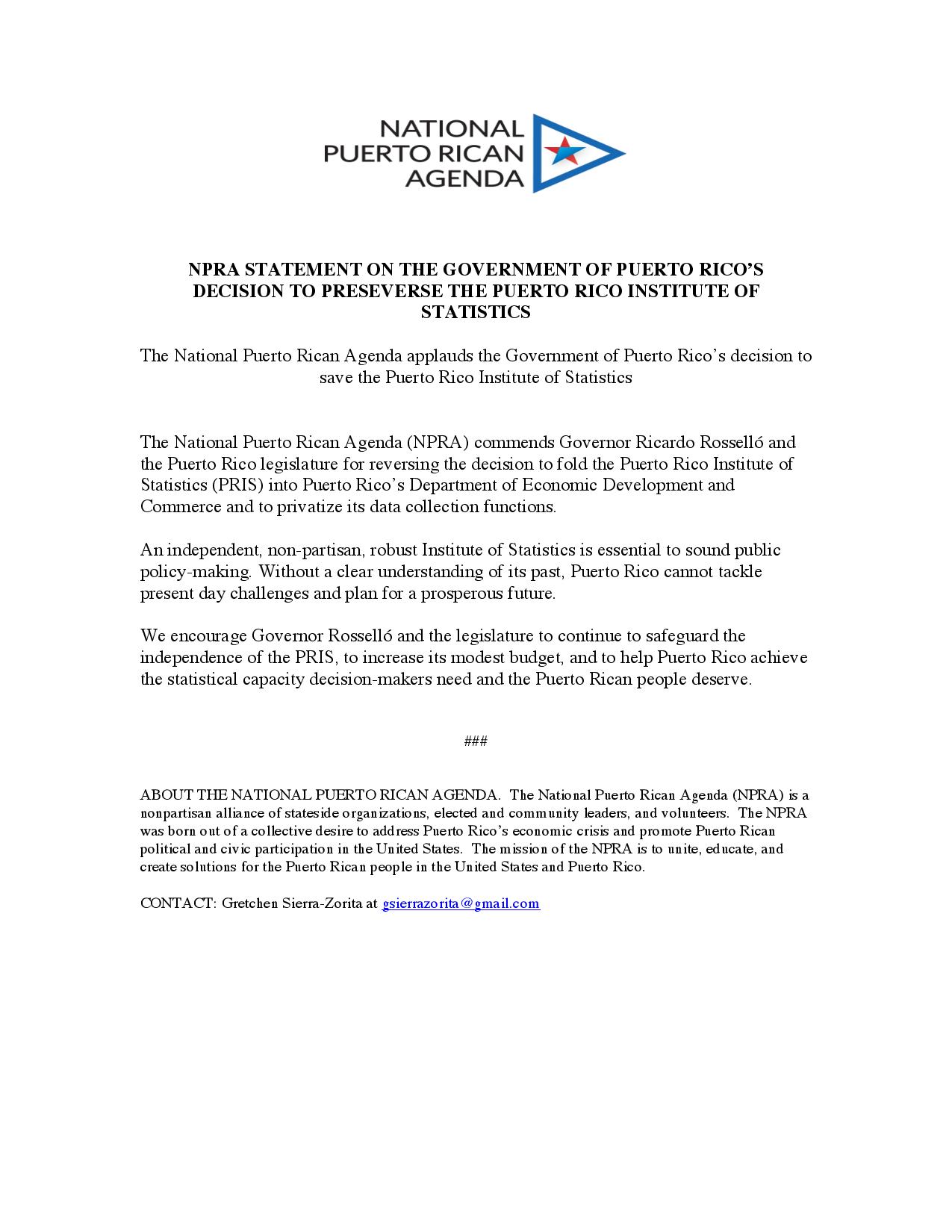 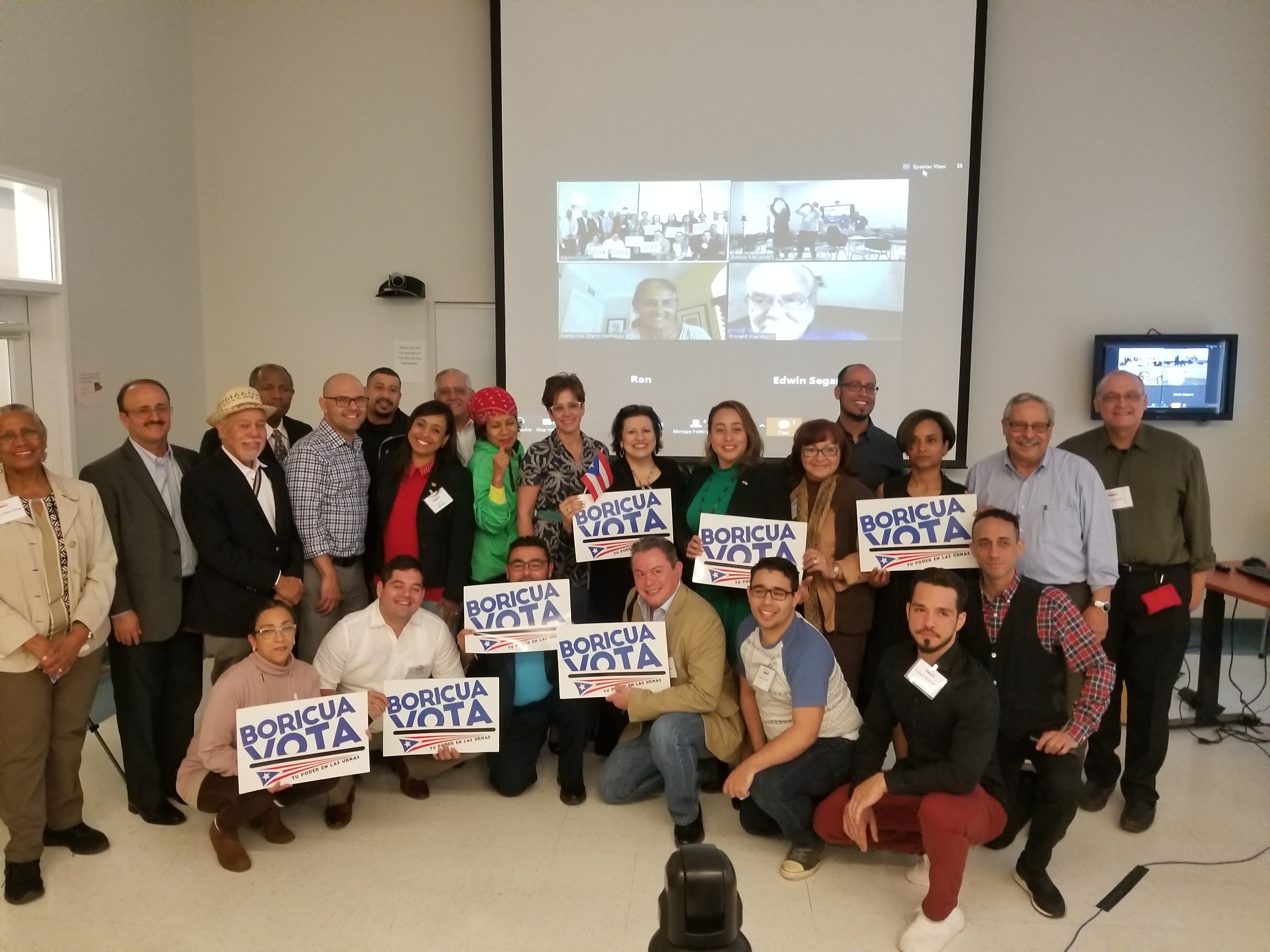 NPRA participates in Diaspora Summit III at Center for Puerto Rican Studies at Hunter College/CUNY, May 11-12, 2018 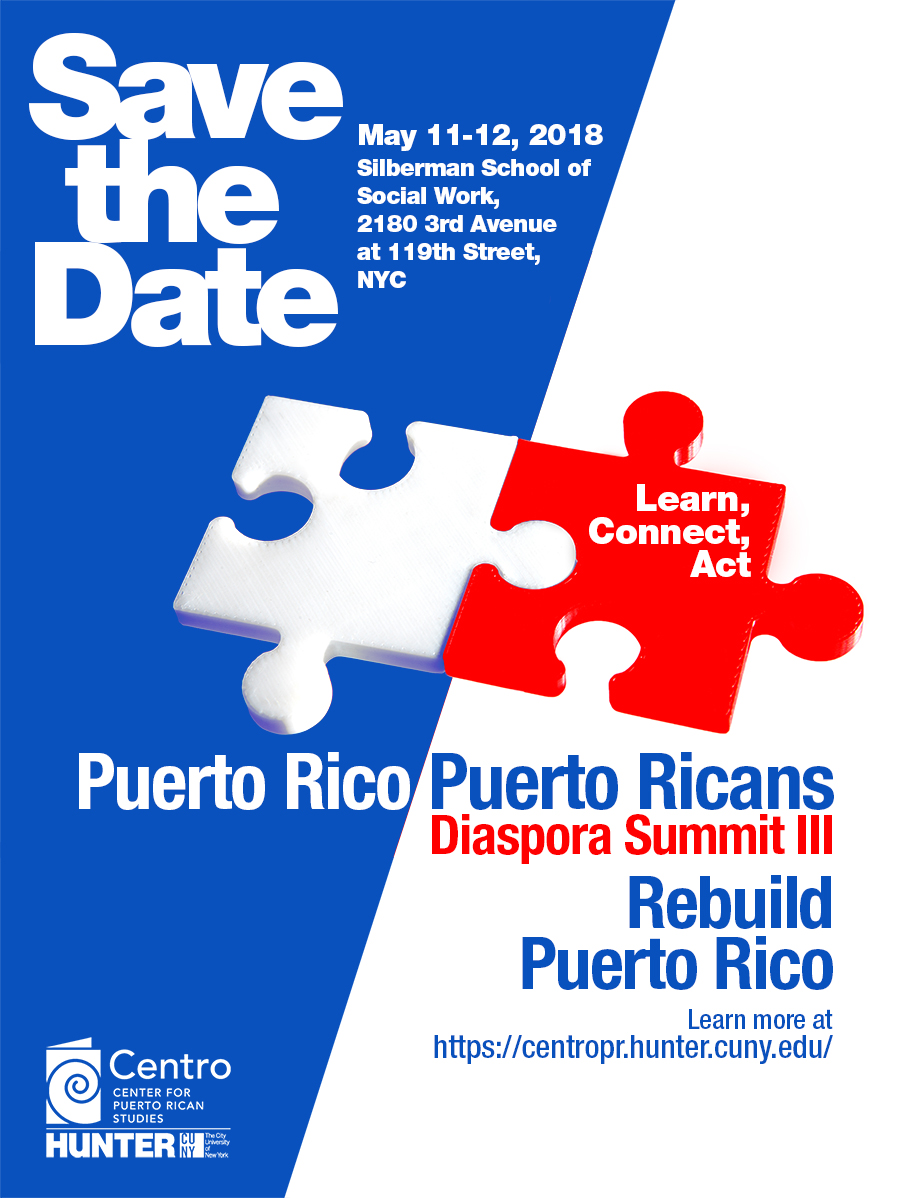 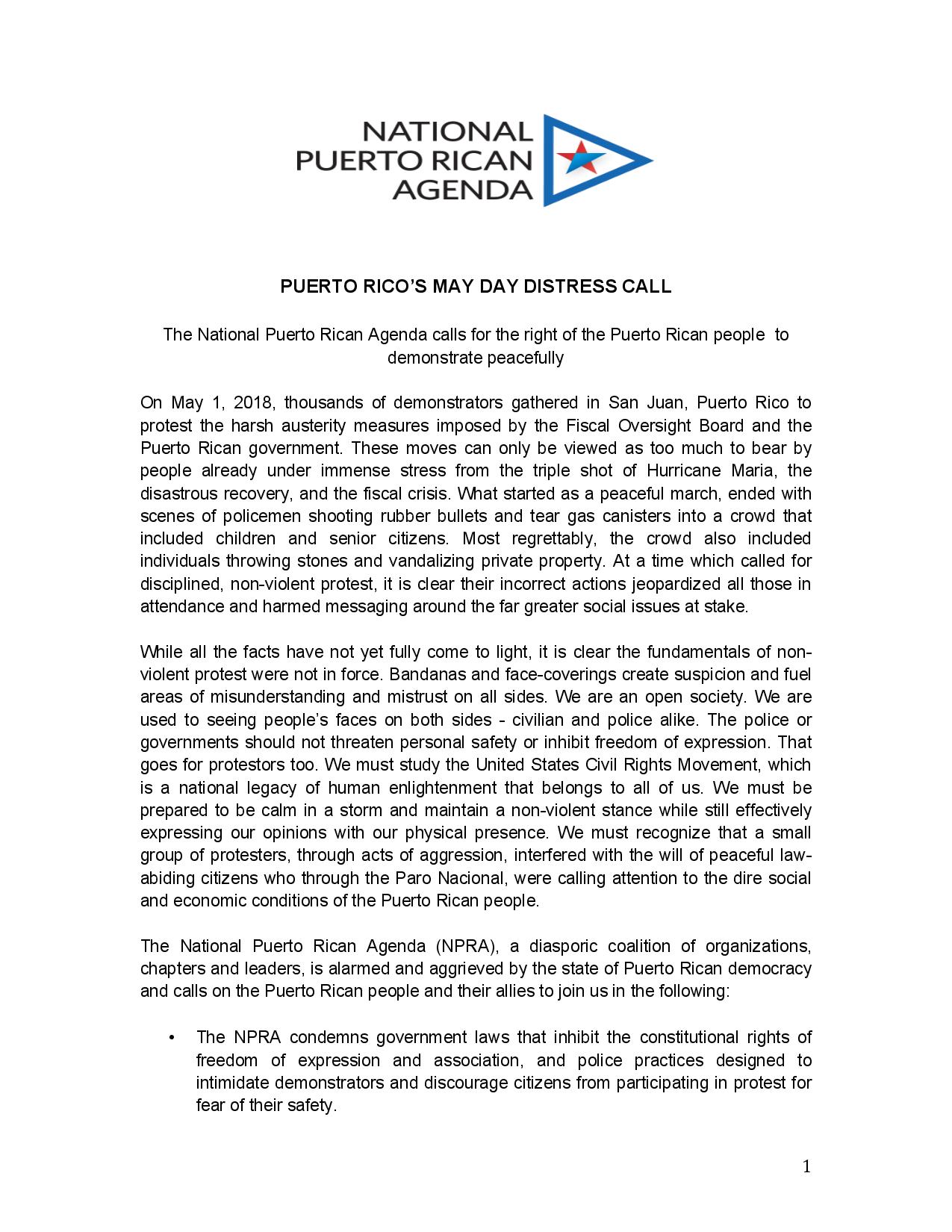 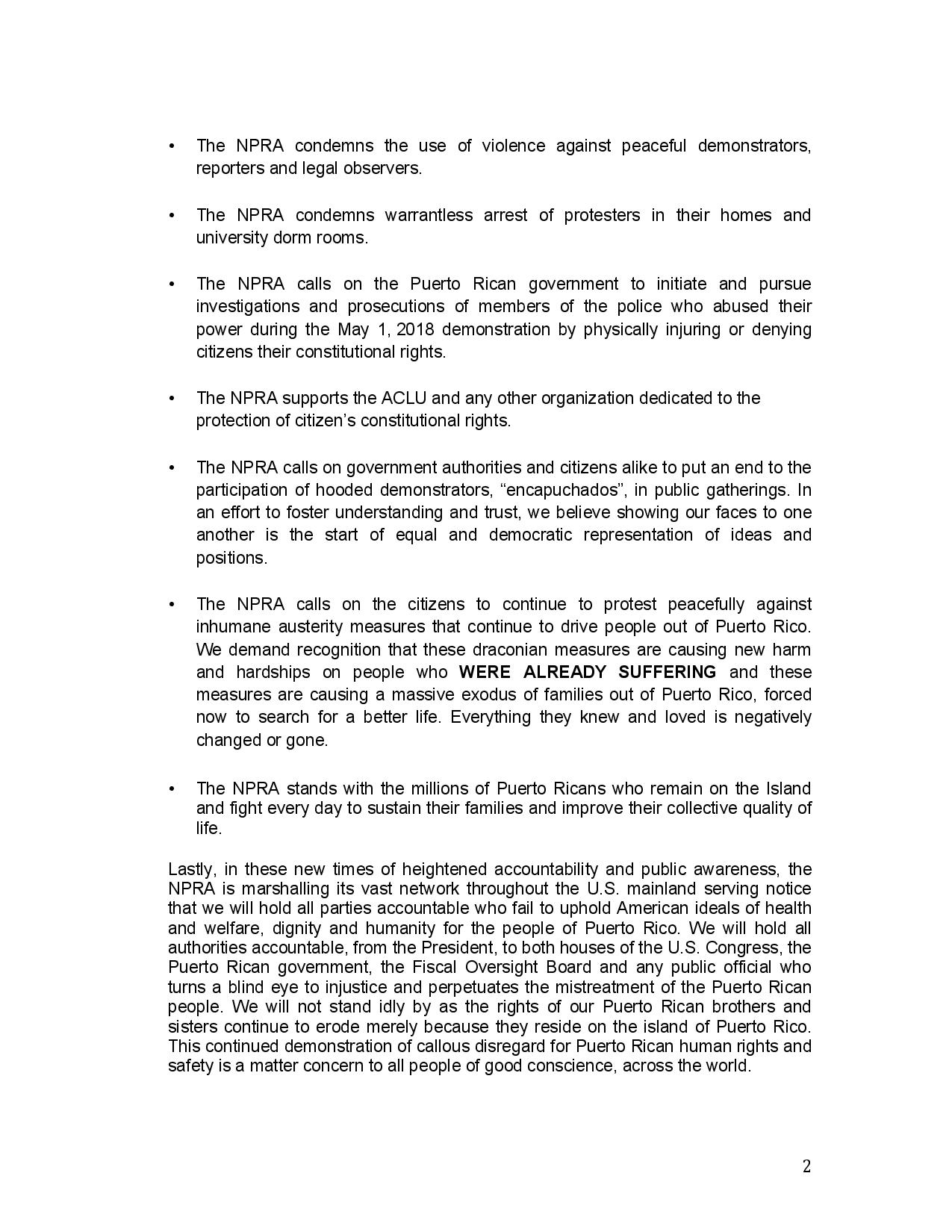 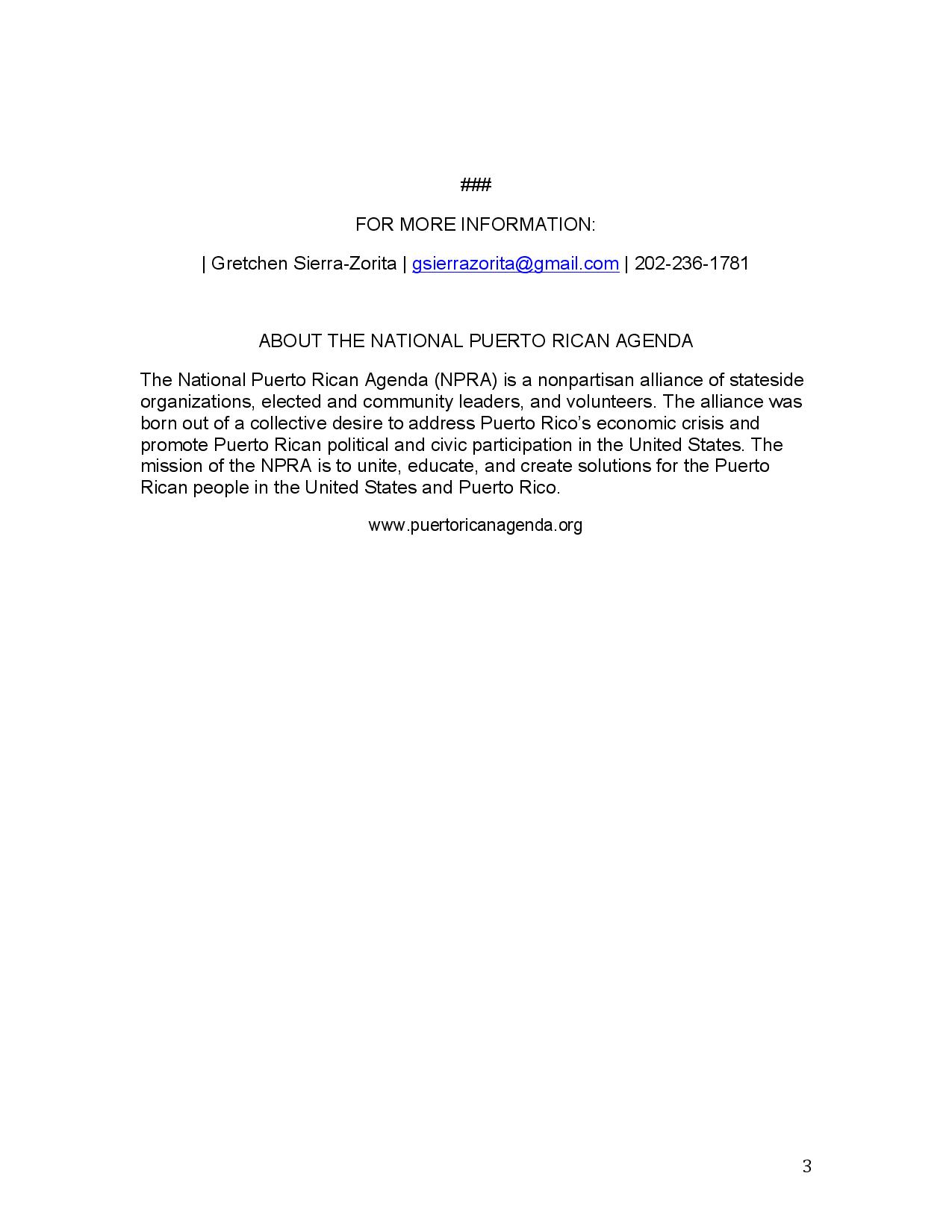 In response, the National Puerto Rican Agenda launched a campaign to encourage its membership and allies to contact Congress and educate its members about the needs of Puerto Rico.

With this objective in mind the National Puerto Rican Agenda issued easy-to-use materials to facilitate visiting, calling and writing to members of Congress. Over 22,500 letters were sent to Congress and the President demanding action for Puerto Rico.

YOUR SUPPORT IS POWERFUL